If you enjoy reading - for yourself or in public, you need practice, as well as texts of varying difficulty. Separately, we would advise you to look at how to properly engage rhetoric, for this you can use the services of best writing services and read useful information there.

Sunday Salon: Back In The Saddle

It has been a number of Sundays since I’ve made note of my reading, or at least my attempts to keep up with my TBR shelf. (Which, as was pointed out to me recently, is bowing under the weight. I kid you not!)

I did finish two ARC’s recently, you can read the reviews here and here.

I am nearly done with Jhumpa Lahiri’s Interpreter of Maladies, winner of the Pulitzer Prize in 2000 as well as the PEN Award, and have begun to read March by Geraldine Brooks, which is also a Pulitzer Prize winner (2006).

But since those are on my nightstand, there really is no respite in sight for my poor TBR shelf. 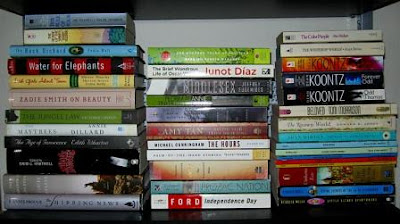 On top of that, I was feeling up to going out today and decided to visit my favorite used book store as I have not been able to peruse their shelves in weeks.

Perhaps it wasn’t such a good idea.

The only thing keeping me from filling my book bag was the fact I forgot to bring my checkbook and they don’t take debit cards. Thank goodness! I only bought four books, but after placing them on the shelf I became immediately apparent that this was all I could squeeze in with a shoe horn fit in with all the others awaiting my attention.

Here is what I was lucky to find: 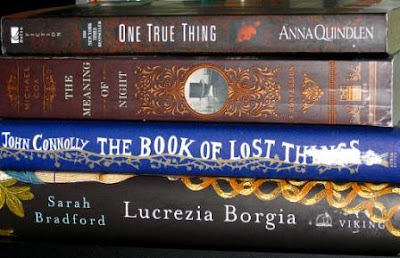 (1) One True Thing by Anna Quindlen. I liked the movie, but as is generally the case, the book is almost always better. I hope this holds true. Again, found in the bargain bin and worthy of being given a new home.

(2) The Meaning of Night by Michael Cox. After reading the advanced copy of his follow up, The Glass of Time, I knew I had to get my hands on the first book. You can imagine my amazement at seeing this while looking around their new arrivals. It was fate. I know it!

(3) The Book of Lost Things by John Connolly. I have heard nothing but good things about this book, and just couldn’t understand what it was doing in the bargain bin. Fate again? Not sure, but for a couple of dollars I felt perfectly justified in rescuing it.

(4) Lucrezia Borgia by Sarah Bradford. I don’t read many biographies. Historical Fiction, but rarely historical non-fiction. However I remember watching the History Channel, or something like it, and they had debunked many of the myths surrounding Lucrezia. From what I have discovered, this book has received very mixed reviews, however at only a few dollars I thought it worth being given a chance. And I will give it that chance. Once I get around to it. In my lifetime. I hope.

Review: The Glass of Time by Michael Cox

This is a sequel to a book I have not read, however it stood on its own quite well. I never felt I was missing something as sometimes occurs when reading a plotline that is too closely tied in with its predecessor. If you have not heard of this author, or his work, the first book in this series is called The Meaning of Night. It has received numerous positive reviews and I am making it a point to get my hands on a copy as soon as I am able.

As the author has noted:

Like The Meaning of Night, The Glass of Time is concerned with the nature of identity, the enduring power of the past, and the corrosive effects of concealing guilty secrets. Set twenty years after the events described in The Meaning of Night, the novel deals with the tragic consequences of those events, particularly on one of the principal characters from the first book, Emily Carteret, now Lady Tansor.

The main technical challenge was to create a narrative that stood on its own two feet. This meant that I had to devise ways of giving readers unfamiliar with The Meaning of Night the necessary plot information without simply regurgitating material from the first book.”

In this, Mr. Cox succeeds tremendously.

Like its “beguiling” and “intelligent” (New York Times Book Review) predecessor, The Glass of Time is a page-turning period mystery about identity, the nature of secrets, and what happens when past obsessions impose themselves on an unwilling present. In the autumn of 1876, nineteen-year-old orphan Esperanza Gorst arrives at the great country house of Evenwood to become a lady’s maid to the twenty-sixth Baroness Tansor. But Esperanza is no ordinary servant. She has been sent by her guardian, the mysterious Madame de l’Orme, to uncover the secrets that her new mistress has sought to conceal, and to set right a past injustice in which Esperanza’s own life is bound up. At Evenwood she meets Lady Tansor’s two dashing sons, Perseus and Randolph, and finds herself enmeshed in a complicated web of seduction, intrigue, deceit, betrayal, and murder.

The most interesting aspect of this book was how it is presented in ‘Acts’. And like a play, each of its characters plays a role. Nearly everyone, except some of the minor characters, puts on a façade. This is an effective style that keeps the reader entranced as you are continually attempting to see behind the mask and discover the truth.

The protagonist, young Alice Gorst notes this very aspect in the one of the characters she is confounded by:

Her look seems to express something unsaid, significance beyond those unexceptional words. It is another instance of that curious ambiguity that characterizes everything about her, and which it vexed me very much to be unable to fathom.

Some are not so deliberately misleading as they are merely puppets of those seeking to manipulate them for their own nefarious purposes. They are playing a role but not knowingly, their true identity, or nature not being revealed until necessary.

This is a mystery made all the more enigmatic by those who the author introduces – none seemingly as they appear. Once realized, this adds a depth to the characters, and the story that cannot be overlooked. One must read, and read carefully in order to learn who is who, and what their importance is in unraveling the truth.

The reader must pay attention. And that I did, page after page.

My only concern is that the style is that of writers such as Wilkie Collins. This late nineteenth century tone is much more formal than many modern novels. Those readers, who are not large fans of historical fiction, or of authors such as Collins or Dickens, may not find this to their liking.

It actually is the only reason that this book did not rate higher. Don’t get me wrong, I did find the story very good, but at times, this tone caused me to take a break now and again, or read through the chapters more slowly. When I tried to figure out why, my only answer was that, in a way, I was having to ‘translate’ from the formality of nineteenth century writing into a more manageable language that I am comfortable with and understand more readily.

Of course, I really cannot ding the author for such a fault as it is all mine. However, I give my highest rating to books I simply could not put down, and this book I did put down. But I assure you, it was never far from my side.

It is a beautifully written book. Here are two passages that sum up the protagonist’s challenge and clearly displays the wonderful way Mr. Cox builds his characters, and the tension created between them:

“Lady Tansor’s interests and mine were apparently irreconcilable, yet I did not know why, or, indeed, what those interests were. I must bring my mistress down…I was a blind soldier, sent weaponless into battle, fighting for an unknown cause, against an enemy towards whom, in my present state of knowledge, I felt no animosity.”

“Seeing her standing there, so mysteriously alluring in the fire’s glow, I knew that I could never admit to Madame what I could hardly admit to myself: that I was becoming captivated by this woman, whose still unrevealed iniquities I had come here to expose to the world. What a contradictory and perplexing thing is the human heart, that it can be at once attracted to and repelled by the same object, and drawn, despite itself, to what it seeks to destroy!”

I am giving this book 4 Stars, as it was one I could put down, but hated doing so. I think this is the first book that truly epitomized this rating.

If you would like to learn more about The Meaning of Night, this books predecessor, please visit http://www.themeaningofnight.com/. The site offers the first part of the book as a download and I highly recommend giving it a read. Please note that it is not necessary to do so before reading The Glass of Time, in fact, if you truly wish to be surprised by some of the revelations made at the end of the book, I recommend waiting.

The Glass of Time also has its own web site at http://www.glassoftime.com/. I found it a great site full of information. It was almost like having a reading guide.

I highly recommend both books. And yes, I know I did not read the first….but I will.

This week, Dewey has asked that:

1. Take one or more close up photos of book covers.
2. Decide on how you want to run your guessing game.
3. Come back and sign Mr Linky, so other Weekly Geeks will be able to find your post.

All these are books I have already reviewed. 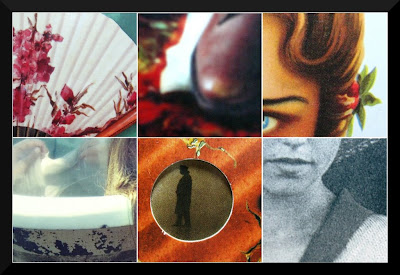 I wish I had something to give away to make this more fun, but I don’t. However, I still think it would be fun to figure out which books are depicted above.

What I will do though, for the first person who guesses all six correctly, is give you, and your blog, a special ’shout out’ at the beginning of this blog post after I have confirmed you are indeed the first. Underneath that, I will make a list of all those who decided to play.

UPDATE:
Congratulations to Icedream on being the first to get all six correct! She was lovely enough to email me her answers, so that others will still have the fun in trying to guess. As promised I am posting my kudo’s to her as well as a link to her beautiful blog Reading In Appalachia –her “place to discuss books (and whatever else may cross my mind). I will write an occasional review but usually I just post an opinion piece about books I have read.”

She also has a sticky post with a link to many of those places that are giving away books, so if you are interested, please head on over, peruse her site, and check out those giveaways!

As for our other players so far we have:
Ichigo who has guessed 3 out of the 6.

If you would like to participate in Weekly Geeks, please check out the information posted here.