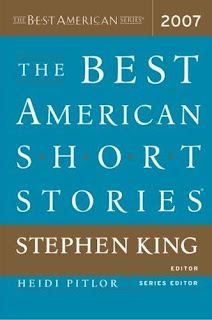 “Riding the Doghouse” by Randy DeVita (2006)
First Published in: West Branch, No. 58 Spring/Summer
Reprinted in The Best American Short Stories® 2007

I’ve actually read several short stories from this collection. However, I have had a difficult time with preparing their reviews. I am not sure why. Part of it, I must admit, is that I am used to having a story and its characters develop over time, thus I get to know them better – or at least feel as if I do. When the narrative is shortened, I must look a little deeper and work a little harder at comprehending the author’s intent. Of course, this is why I joined the above mentioned challenge. I wanted to stretch myself, and my sensibilities as a reader.

Previously, the only short stories I have read were ghost or horror stories; ones that are perfect for camp-outs and pajama parties. I loved them as a child, and I still do.

I think that is why I was drawn to this particular story by Randy DeVita. For it seems that not all ghosts prowl about creepy mansions in the middle of the night. Some live in the deep recesses of our memories: lurking, waiting, haunting.

As with other, classic ghost stories I remember, this one begins in the darkness of early morning:

“A storm outside. Beside me the soft breath of my wife shifts the covers that we share. I am dozing, trapped between midnight and dawn, and in my half-sleep, I listen as rain sleets against our bedroom window; oak branches, stripped by autumn, scrape at the back of the house. A surge of electrons excites the air; my ears hum. There is a violent crash, like a shattered windshield, and thunder drums past like traffic on the interstate. The windows rattle in their frames.
My eyes snap open.”


It is not only the storm that has awakened the narrator. And to explain why, would mean spoilers.

According to the author, this story derived at a time when he had

“been writing, with alarming consistency, pretty forgettable horror stories – stories far too consciously intended to scare others. So I challenged myself to write about something I feared,”


He also acknowledges that while revising the story, he discovered it was also a story about a relationship – that “Maybe that’s enough for a story – two people speaking to each other in a closed space, unwilling or unable to say what they really mean.”

In my opinion he succeeded in writing about both.

Sometimes the ghosts are of our own making. And that it is not what we say, but what we have not said, which haunts us.

I am giving this story 4 stars as I cannot say that it is a story I could not put down, however I did return to it often, and have even re-read it several times.

I had a difficult time with completing this review. For some reason, I remain emotionally involved with the story. I know logically that this is only a story – its fiction.

I must be mental. No. Really. What normal person would go through nearly an entire packet of Kleenex even before finishing the novel? Who would mope around the house afterwards, wandering from room to room, in a daze, grieving? Wow.

This is new, and disturbing. But in a complimentary sort of way, as obviously the author has succeeded in creating a story, and a set of characters that can evoke such a response. I don’t think I have ever been so moved that even days later, I find I cannot even discuss what I have read without becoming emotional. Why? I honestly don’t know. I do admit, however, that I am someone who, at times, cannot prevent a narrative and its characters from connecting with some emotion hidden deep inside, which once touched, bursts forth and proceeds to turn me to Jell-O on the spot.

This is a good story. From the very beginning, I was intrigued by how the author uses a prologue to introduce her main characters and their story:

Henry, of course, is the time traveler

“When I am out there, in time, I am inverted, changed into a desperate version of myself. I become a thief, a vagrant, an animal who runs and hides. I startle old women and amaze children. I am a trick, an illusion of the highest order, so incredible that I am actually true.”


Clare, his wife, waits and longs for her husband’s return:

“Long ago, men went to sea, and women waited for them…Now I wait for Henry. He vanishes unwillingly, without warning. I wait for him. Each moment that I wait feels like a year, an eternity. Each moment is as slow and transparent as glass.”

The remainder of the book reveals how their love holds them together, throughout their lives and throughout time. No relationship is perfect, and this book never attempts to state otherwise. The passage where Henry spends Christmas with Clare and her family for the first time, is an excellent example how true to normal this book attempts to be, even though one of its main characters is a time traveler.

I also found that this book really is about longing as much as it is about love, and how it seems that you cannot have one without the other. It is also about time, well at least one’s perception of time. The author, in an interview with Mark Flanagan, was asked, “Was there a central theme that you wanted readers to grasp?” She answers, “I wanted people to think about the intimacy of time, how ineffable it is, how it shapes us. I wanted to write about waiting, but since waiting is essentially a negative (time spent in the absence of something) I wrote about all the things that happen around the waiting.”

As the story progresses, the reader is pulled and pushed along, just like Clare and Henry, who long for normalcy and control, and never completely achieve either. In the beginning, it is a little disconcerting, but necessary as it helps the reader connect in such a way that by the end of the novel, one cannot help but feel as if we too, are facing the inevitable, and are powerless against it.
The Time Traveler’s Wife offers us another view; a different concept, of time and how it affects our lives. Yet when all is said and done – it all comes down to the same thing, for us and for Clare and Henry. Time is endless, but we are not.

I will not say more than that in fear of giving too much away. Also, I would like to state that the ending isn’t as sad as I probably have led you to believe, however, I highly recommend having a plentiful supply of tissue at hand, just in case.

I am giving this book 5 Stars. It is that good. In fact so good, I am seriously considering coming up with a TBR-R (To Be Re-Read) List, or maybe a SDI (Stranded on a Desert Island) List. Either way, the first two books I will be adding are The Shadow of the Wind and this one.

Review: The Shadow of the Wind by Carlos Ruiz Zafón

“I still remember the day my father took me to the Cemetery of Forgotten Books for the first time.”

“Soon afterward, like figures made of steam, father and son disappear into the crowd of the Ramblas, their steps lost forever in the shadow of the wind.”

Ten years old, and still grieving the tragic loss of his mother six years earlier, Daniel Sempere is led by the hand to a magical place of where “a labyrinth of passageways and crammed bookshelves rose from base to pinnacle like a beehive woven with tunnels, steps, platforms, and bridges that presaged an immense library of seeming impossible geometry.” It is explained to him that the Cemetery “is a place of mystery…a sanctuary” and that “according to tradition, the first time someone visits…he must chose a book…and adopt it, making sure that it will never disappear, that it will always stay alive.”

Daniel, a somber youth, takes his charge seriously. He wanders amidst the cavernous library until he stumbles upon a book he felt destined to find. That very night, he reads his choice, The Shadow of the Wind by an unknown author named Julián Carax. He is so mesmerized by the narrative; he stays up all night to finish the book. Even then, he cannot forget the experience. “My eyes began to close, but I resisted. I did not want to lose the story’s spell or bid farewell to its characters yet.”

As I read this first chapter, I too realized that this book was going to be a novel which would prove difficult to finish. Not in the way in which you are thinking. This is one of those books that you cannot put down. One which you want to finish in one sitting, but know, once you reach the end, you will be disappointed. Not because the author or his story has let you down, but because it has ended, as you knew it must. But you do not want to let go – not just yet.

As another character explains after reading The Shadow of the Wind, “I had never known the pleasure of reading, of exploring the recesses of the soul, of letting myself be carried away by imagination, beauty, and the mystery of fiction and language.” I would not say that this book necessarily had me “exploring the recesses” of my soul, but at times, I did find myself being carried away by my imagination amongst the beauty and mystery of Mr. Zafón’s fiction.

Intrigued by the book, and hoping there are others, Daniel seeks to find any other works written by Carax. He soon discovers that there are none. Someone has been systematically locating, and then destroying every copy in existence. As Daniel seeks to find out more about Carax, and the novel, he is approached by a mysterious figure; one who smells of burnt paper. Remembering his promise at the Cemetery of Forgotten Books, he refuses, but the die is cast. What follows is a mystery woven through with intrigue and remembrances, which serve to help the reader understand the past behind the present. Of course, all of this leads to a climax, and even though expected, it keeps the reader entranced all the way through.

Mr. Zafón ties all the loose ends neatly, but in a way which leaves the reader feeling bittersweet about the experience. The ending is not a sad one, but nor is it joyous. But this is as it should be. How could we be so moved, if we had not become so involved? And isn’t it true in life, that when we finally have some of the answers, they are not exactly what we had expected?

This is why I give this book 5 stars. I could not put it down. And when I had finished, I found myself going back over certain passages, hoping that perhaps I missed something or some subtle nuance I rushed over in order to get to the next scene. There are those novels which I keep on hand in case I wish to re-read them, but very few in which I do so immediately after finishing them. This is one of those books.

Carlos Ruiz Zafón was born in Barcelona and is the author of six novels, including The Shadow of the Wind, the most successful novel in Spanish publishing history after Don Quixote. His work has been translated into more than 35 languages and has received numerous international awards. His books have sold over 15 million copies worldwide and The Angel’s Game was the fastest selling book of all time in Spain.